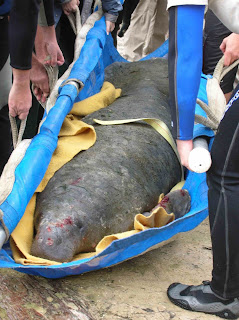 This manatee was rescued from Wakulla Springs during a cold weather snap in February 2008.

The number of manatee deaths in 2010 is already more than 50 percent higher than the record number that died in 2009 — with cold weather this year having taken a heavy toll on the lumbering sea cows, Florida wildlife officials said Friday.

The Florida Fish and Wildlife Conservation Commission documented 699 manatee deaths in state waters through Dec. 5 compared to 429 documented in 2009, the agency said. Manatees, the state’s official marine mammal, are listed as endangered by the U. S. Fish and Wildlife Service.

Cold exposure accounted for at least 244 fatalities while many of the 203 with undetermined causes of death may also have suffered from the cold. Wildlife officials said the die-offs underscore the importance of warm water habitat, such as springs and power plant outfalls.

“We are very concerned about the unusually high number of manatee deaths this year,” Gil McRae, director of the agency’s Fish and Wildlife Research Institute in St. Petersburg, said in a statement. “Data from our monitoring programs over the next few years will tell us if there are long-term implications for the population.”

The new figures also could fuel the debate on whether there are enough boating restrictions to protect manatees or too many to allow for boating enjoyment.

The cold weather likely caused fewer fatal collisions with watercraft earlier in the year as manatees congregated in warm water, wildlife officials said. But the number of deaths was increasing later this year and could match last year’s 97 deaths caused by collisions.

Ted Forsgren, executive director of the Coastal Conservation Association Florida, a recreational fishing group, said the deaths in 2010 suggest a need for determining the “carrying capacity” for manatees — or factors that limit the manatee population such as access to warm water in the winter.

He noted that the agency’s aerial survey earlier this year counted 5,067 manatees statewide, an increase by more than 1,200 animals from 2009.

“I think the question they would need to be very cautious about is whether they need any additional [boating restrictions],” Forsgren said.

The deaths show that manatees are vulnerable and that continued boating restrictions and improvements in warm water habitat is needed before the species is reclassified, said Pat Rose, president of the Save the Manatee Club.

“They [federal wildlife officials] are going to have to reassess where they are, both with good things happening with the population but also this horrible thing happening right now with the unprecedented mortality in the population,” Rose said.

(Story provided by The Florida Tribune. Photo and story copyrighted by Bruce Ritchie and FloridaEnvironments.com. Do not copy or redistribute without permission, which can be obtained by contacting brucebritchie@gmail.com.)