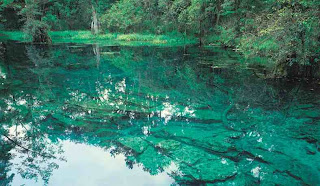 Peacock Springs State Park near Luraville is one of the 53 state parks that would be closed.

State agencies last fall were asked to come up with 15-percent budget cut proposals for the upcoming fiscal year. State legislators are confronting a potential budget shortfall of $3.62 billion as they head into the 2011 session.

In response, the Florida Department of Environmental Protection in October proposed measures including saving $6.5 million by closing 53 parks that are only open during daylight hours. Those parks represent one-third of the 160 state parks but they have combined attendance of nearly 1.1 million, or 5.4 percent of statewide park visitation. (To download the list, click here)

During a meeting Wednesday of the House Agriculture & Natural Resources Appropriations Subcommittee, Rep. Michelle Rehwinkel-Vasilinda, D-Tallahassee, called the possible park closures “heart-breaking” and said taking such action could affect Florida’s tourism. Rep. Leonard Bembry, D-Greenville, questioned whether the cost to local economies would be more than the $6.5 million in savings to the state.

“I think it is a fair characterization to say the impact would far exceed the savings,” said Jennifer Fitzwater, DEP’s deputy secretary for policy and planning.

Several subcommittee members asked DEP to consider other options including raising fees or allowing local governments or civic groups to take over management of the parks. They also asked whether DEP would sell the closed parks.

Fitzwater said various options will be considered for keeping the parks open but noted that DEP had raised park fees in 2009. She also said DEP did not want to sell the closed parks because they could be reopened when revenues increase in the future.

DEP also proposed merging the Office of Greenways and Trails with the Division of Recreation and Parks, saving $1 million by eliminating 16 positions. DEP also proposes closing six field offices responsible for the management of 16 coastal and aquatic preserves.

Fitzwater also said new DEP Secretary Herschel Vinyard had not been briefed on the budget exercise. “He may come back and say, ‘You know what? This is a bad idea,'” she said.

Rep. Trudi Williams, R-Fort Myers and subcommittee chairwoman, reminded the panel members that DEP had proposed closing down 57 parks as part of a budget exercise two years ago but was able to keep them open.

“Maybe this time around we will be looking more at keeping some [parks] only open on the weekends,” she told subcommittee members. “Then again, we might not be looking at [closing] parks depending on what [Secretary Vinyard’s] issues are that are most important.”

(Peacock Springs State Park photo by James Valentine. Story provided by the Florida Tribune. Story copyrighted by Bruce Ritchie and FloridaEnvironments.com. Do not copy or redistribute without permission, which can be obtained by contacting brucebritchie@gmail.com.)