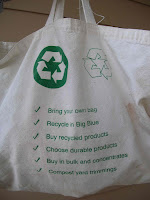 Following an uproar last month over a draft proposal to ban plastic and paper shopping bags, the Florida Department of Environmental Protection on Thursday holds another public workshop on whether to regulate bags.

DEP last month withdrew a draft report that recommended taxing bags by up to 25 cents each and then banning them by 2015. The Legislature in 2008 adopted a bill prohibiting local governments from banning retail bags until DEP issues recommendations and they are adopted by the Legislature.

But the recommendations in the draft report last month drew criticism from conservative commentators and newspaper editorials. DEP Secretary Michael Sole said Tuesday that the report was withdrawn because it didn’t contain options other than taxing and then banning bags.

“I felt we needed to take a step back and look at other options rather than one solution,” Sole told FloridaEnvironments.com.
DEP posted the report on its Web site Oct. 14 and took it down on Oct. 16, according to a department memo to interested media.

By the time it was withdrawn, the draft report had already created a storm of reaction. Panama City News-Herald editorial

The Sierra Club issued an alert on Oct. 28, saying the report was withdrawn “likely because of industry pressure.”

Indeed, the Florida Retail Federation issued its own alert about the draft report on Oct. 15, and held a conference call with its members. The next day, Sole called the group to say that the report was being withdrawn, according to a follow-up alert.

The trade group for the state’s second-biggest industry had spent months talking with the state about how to keep the roughly 5 billion throw-away bags Floridians use yearly from ending up in streets, storm drains and beach dunes.

“Gosh, this is not what we expected,” said Rick McAllister, president of the Florida Retail Federation, told the Florida Times-Union.

The Sierra Club is urging its members to tell Gov. Charlie Crist to support the ban. Sierra Club member Dwight Adams of Gainesville said the draft report was thorough and the ban is needed.

“It sounds like politics trumping science,” Adams said of the withdrawn report. He is chairman of the Florida Chapter’s waste minimization committee.

Sole denied politics was involved in the decision. “I was unfortunately not given a copy of the report before it went out,” he said.

Increased plastic-bag recycling and other options, Sole said, should be explored more thoroughly, including “cradle-to-grave” responsiblity in which companies that produce the bags are responsible for using them in new products.

“Plastic bags do have an adverse impact not only on Florida’s environment but the global environment,” Sole said.

To watch a video about the harm caused by plastic bags, go to Metacafe.com.

(An earlier version of this report only stated that the recommendation in the draft report called for banning plastic bags. The story was revised to reflect that paper bags also would be taxed and banned under the recommendation.)