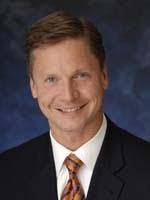 Rep. Dean Cannon, chairman of a House council that is holding hearings on whether to allow oil drilling within 10 miles of Florida’s Gulf coast, said today that he isn’t interested in who’s behind the firm that’s been pushing for drilling legislation.

Drilling supporter say Florida waters should be opened to energy production to boost the economy and reduce dependance on foreign sources of oil. Opponents say drilling threatens the environment and coastal tourism economy.

Representatives of Florida Energy Associates, which has been pushing for drilling legislation, have declined to disclose the firm’s backers.

The firm has nine registered lobbyists at the Legislature, down from the 35 it had in 2009 when the drilling legislation first emerged in the House.

Cannon, R-Winter Park and chairman of the House Select Policy Council on Strategic & Economic Planning, said today during a House issues briefing for journalists that he instead was interested in requiring disclosure from parties who will be conducting drilling activities.

“We want to know more about the policy and who is going to do what rather than who is funding any particular (lobbying) group,” Cannon said.

But asked today when that question would be decided, Cannon said that would happen as part of the legislative process as drilling bills emerge from the House and Senat