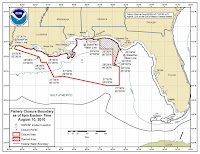 Florida officials on Tuesday welcomed the reopening of 5,144 square miles of federal waters in the Gulf of Mexico that had been closed to fishing because of the BP oil spill.

Federal waters are beyond state waters, which extend 10.36 miles into the Gulf. The re-opened area, which is almost the size of Connecticut, extends from Cape San Blas west to East Bay near Pensacola. (View the map at http://sero.nmfs.noaa.gov/deepwater_horizon_oil_spill.htm )

“The federal waters off beautiful Northwest Florida are once again open for fishing, and Florida’s commercial and recreational fishermen are eager to get back to work,” Gov. Charlie Crist said in a written statement. “I join them in celebrating this much-needed boost to our economy and quality of life.”

The area was reopened based on tests of fish collected between June 27 and July 20, according to the National Oceanic and Atmospheric Administration. Federal waters off about 40 miles of the coast to the Alabama state line remain closed.

Earlier in the day, Agriculture Commissioner Charles H. Bronson kept up his blame of the news media for harming the safety reputation of Gulf seafood.

ABC News on Monday featured a shrimper in Louisiana who said he wouldn’t sell shrimp that he caught from an area that had been reopened because he said they have oil on them. NOAA Administrator Jane Lubchenco told reporters during a conference call she was not familiar with the report. “As far as I’m aware, areas we have re-opened are safe,” she said.

Referring to the ABC News report during a Cabinet meeting, Bronson said, “I can tell you what they did for the industry was terrible.” He said there had been no incidents of contaminated seafood in Florida. And he said he hopes the national media would be selective in not “reporting the whole Gulf of Mexico as having a problem — as they did early on.” Department of Environmental Protection Secretary Michael Sole also called the ABC report “unfortunate.”

The remaining federal waters off Florida’s coast could be reopened in a few weeks if test results show the fish is safe to eat, said Roy Crabtree, southeast regional administrator of the NOAA Fisheries Service.