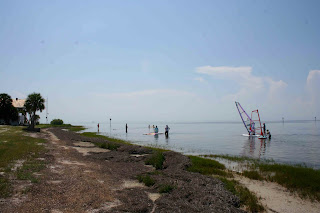 Florida is moving ahead with adopting its own rules to measure the health of estuaries despite its opposition to a federal proposal to do the same for lakes and rivers, Department of Environmental Protection officials said Tuesday.

Department officials on Tuesday held a hearing in Tallahassee on proposed numeric nutrient criteria, which are specific limits for nitrogen, phosphorus and chlorophyll-a, in estuaries. They replace a narrative criteria in state rules that some environmentalists said were too vague. A representative of one statewide environmental network sharply criticized DEP’s proposals for estuaries along the Florida Panhandle.

DEP and the U.S. Environmental Protection Agency in January 2009 agreed that numeric criteria were needed and the state proposed them for lakes and streams, but then the federal agency later that year agreed with environmental groups to set its own standards. DEP along with utilities, agriculture and industry groups have waged an opposition campaign this year against the federal proposals.

At the Tuesday hearing, Daryll Joyner, DEP’s chief of the Bureau of Assessment and Restoration Support, said the department hopes EPA will adopt the criteria for estuaries that the state approves or signal its support to Florida ahead of time.

“Our goal is to reach agreement with EPA on the criteria,” Joyner said. “I do want to acknowledge that was our goal [in 2009] on the freshwater criteria, too.”

He told the Florida Tribune during a break that DEP can work more closely with affected stakeholders in Florida than the federal agency.

Rod Reardon, of Carollo Engineers, said the state should use a “rational basis” to approach the issue and develop criteria that are “scientifically defensible.” His firm produced a report for the Florida Water Environment Association Utility Council last year saying that the proposed freshwater nutrient criteria would cost $700 per household, an estimate that environmentalists dispute.

Linda Young, director of the Clean Water Network of Florida, accused the department during the hearing of painting a false picture of the health of Pensacola Bay and Perdido Bay by saying that existing nitrogen and phosphorus levels protect those waterways. Although DEP scientists said those bays have suffered from fish kills, loss of sea grasses and are lacking other key aquatic life, they said industrial pollution has been reduced and the remaining problems are not caused by nutrient pollution.

“They [DEP officials] will see me in court,” Young said during a break in the hearing. “And they’re going to hear from the people of Pensacola about it because I’m going to spend the next 10 years of my life going around explaining to people why we are suing the crap out of them and why they need to be pissed off.”

Jerry Brooks, director of DEP’s Division of Environmental Assessment and Restoration, told the Florida Tribune that the purpose of the hearing was to receive comments such as those from Young. The department also holds hearings in West Palm Beach on Thursday, and in Bunnell and Pinellas Park next week. For the schedule, click here.