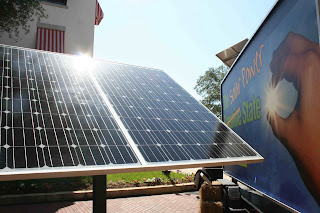 Gov. Charlie Crist has hinted that a special session to address energy issues could be used to extend the program, which paid out $25 million in rebates between 2006 and 2009. The program, which paid up to $20,000 for home solar electric panels and up to $500 for solar water heaters, ran out of money a year ago.

The “Clean Energy Congress” on Tuesday recommended extending the program. The Legislature, dealing with a cash-strapped budget, has not found any money for the program since 2008 and state law called for it to expire on June 30.

On Wednesday, the Florida Energy and Climate Commission agreed to ask the U.S. Department of Energy if $13 million in federal economic stimulus dollars provided to the state for energy projects could be put towards the solar rebate program backlog, said Rob Vickers, executive director of the Governor’s Energy Office.

The DOE inspector general issued an audit earlier this month blaming the agency for allowing Florida to spend stimulus money for solar projects completed before Congress passed the American Recovery and Reinvestment Act of 2009. “They [DOE] have sort of given us mixed signals in the past [as to whether] there would be willingness to use some amount of the money to address the rebate program backlog,” Vickers said.

Most states pay for energy efficiency and renewable energy by putting taxes on electric bills — but not Florida, said James M. Fenton, director of the Florida Solar Energy Center in Cocoa. HB 1267 by Rep. Michelle Rehwinkel Vasilinda, D-Tallahassee, would have extended the program and applied a 25 cents monthly charge on utility bills to pay for the solar rebate backlog and for new projects, but the bill was never heard in committee.

“I don’t think Florida will ever do that because it is a tax,” Fenton said. “They [legislators] argued forever on whether to raise the cigarette tax.”

Some solar installers say the state is obligated to pay for the rebates, although Vickers noted that the application states that rebates will be paid only if funding is available. Shawn Lorenz, who works for Sunbelt Solar Energy in Sarasota and is a member of Floridians for Energy Independence, said applicants and solar installers had to follow detailed guidelines from the state to meet rebate requirements.

“So now it’s the solar contractor’s fault or the person who installed the system’s fault for not knowing about the little wiggle room the Legislature put in?” Lorenz said. “That seems rather dubious to me.”