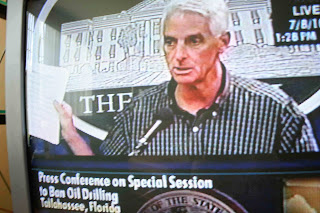 Saying he felt a “compelling duty to protect Florida,” Gov. Charlie Crist on Thursday said he is calling a special session July 20-23 to consider a constitutional ban on drilling in Florida waters.

Crist previously said he supported drilling as long as it was safe enough and far enough away to protect the coast. But he came out against drilling again after the BP oil spill began on April 20.

Crist said in May he wanted to hold a special session to put the drilling issue on the ballot and deal with renewable energy. Although House leaders point out that drilling already is banned in state law, Crist pointed out that the chamber last year approved a bill to allow drilling within three miles of Florida waters.

“This is an issue I think is so important to the state and the economy of Florida,” he said. “Our economy and our environment are inextricably linked in my view.”

And the governor rejected the idea suggested by some House leaders that he was posturing politically in his race for a U. S. Senate bid. House leaders point out that drilling already is barred in state law, though they voted last year to allow drilling and the Senate refused to vote on the measure.

“Politics has nothing to do with this. This has everything to do with doing what’s right for a place I love,” Crist said. “I love Florida. I also know it is barred statutorially. I also know just a year ago they tried to change that statute and drill holes three miles off Florida.”

He said the issue is “time sensitive” because the Legislature has until Aug. 4 to put the issue on the ballot. He also said he won’t bring other issues into the special session.

“It is a rifle shot,” he said. “It is one issue. it is very tightly drafted. I didn’t want to get confused as to what this is about.”

(Story copyrighted by Bruce Ritchie and FloridaEnvironments.com. Do not copy or redistribute without permission, which can be obtained by contacting brucebritchie@gmail.com.)