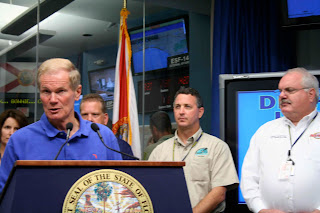 More oil-skimming vessels are on the way to the Gulf of Mexico while the BP oil spill is not expected to affect Florida this week, state officials said Tuesday.

U. S. Sen. Bill Nelson, D-Melbourne, visited the state Emergency Operations Center and announced that 27 U. S. Navy skimming vessels were being deployed to the Gulf from Navy ports in addition to six that already had been sent recently. Florida officials in recent weeks have cited a lack of skimmers to prevent oil from washing ashore.

The U. S. Environmental Protection Agency had to waive a requirement that the skimmers be kept in Navy ports in case of an oil spill, Nelson said.

Florida Department of Environmental Protection Secretary Michael Sole said he doesn’t expect any oil to hit Florida beaches for a week because winds are blowing it to the west. Nelson said that will affect where the skimmers go.

“Fortunately for us the oil is not here in Florida because the winds have shifted over there (to the west),” Nelson told reporters. “The initial ones (Navy skimmers) are going to where the oil is.”

Officials in Washington state have raised concerns that sending skimmers would leave their state vulnerable to an oil spill, according to the Seattle Times. Washington state law requires the oil industry to have the capability of responding to a worst-case scenario there. (http://seattletimes.nwsource.com/html/localnews/2012259959_spill2m.html)

Sole had said two weeks ago that Florida needed 100 skimmers but only had 20, not including five that the state was leasing to work in five bays in the Panhandle. Last Friday, Sole told legislators there were 81 Skimmers working off the Florida coast.

Nelson acknowledged that it took a long time — more than two months since the BP oil spill began — to find the needed skimmers and redirect them to the Gulf.

“Your senator didn’t have a lot of confidence with the way this was playing out to begin with,” he said.

He said the No. 1 priority is to plug the well, and No. 2 is removing the oil from the surface “and keep it out out of the bays and the estuaries and the wetlands.

“When it gets up on the beach you can clean it up there,” he said.

Sole said skimmers serve no purpose now being off Florida’s coast and now are better off Alabama and states to the west. He said enough skimmers from around the nation and globe are coming to meet Florida’s needs.

Even though there is no immediate threat of oil, protective boom will remain in place to keep oil from washing into bays and inlets, Sole said.

“Most of this oil is now to the west of us,” Sole said, saying that Florida had received a “reprieve” because of weather.

“I don’t expect any impact at all this week except for the occasional tar balls,” he said.