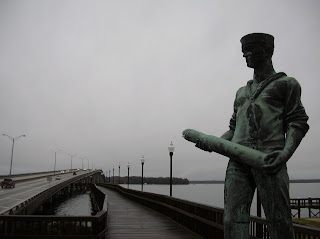 A World War II memorial is silhouetted against a gray sky along the St. Johns River in Palatka

PALATKA — Marihelen Wheeler of Gainesville today told a Senate committee hearing along the St. Johns River that when she’s been to hearings in the past on environmental issues, government representatives listened and nodded their heads but they’re were not really hearing what was said.

“They pat you on the head — the lawmakers and legislators — and say, ‘…Thank you for coming and thank you for your interest. Now you go home and we’ll take care of it,” she said.

But members of the Senate Select Committee on Florida’s Inland Waters told the more than 100 residents at the hearing that they were listening — really. And they urged speakers to keep telling other senators and representatives what they want.

The senators in Palatka heard about North Florida’s springs and lakes drying up, the St. Johns River turning green from algal blooms and the region’s desire to protect its water from being piped south to growing Central Florida.

Some speakers cited a Gainesville Sun report today that groundwater pumping by Jacksonville could be reducing flows about 70 miles away at Ichetucknee Springs.

Further south near Ocala, flows from Silver Springs dropped by 30 percent in the last decade, environmental scientist Bob Knight said. He is president of Wetlands Solutions Inc. in Gainesville.

Knight also said that about one-third of Florida’s groundwater has nitrogen at levels well above what the state says is healthy for springs. A few wells have nitrogen above the level fit for human consumption.

“This is not going to be solved easily,” said Knight, president of Wetlands Solutions Inc. “It takes state action to deal with this.”

Other residents said the St. Johns River Water Management District is encouraging Central Florida to plan for piping water from North Florida rivers. Supporters and opponents in the fight to remove the Rodman Reservoir dam from the Ocklawaha River were united in opposing water transfers from the region.

“I ask you to stand up to these big, powerful Central Florida counties,” Whitey Markle of Citra said.

Sen. Paula Dockery, R-Lakeland and a candidate for governor, told speakers they were “preaching to the choir.” Sen. Lee Constantine, R-Altamonte Springs and committee chairman, said, “We would love to have all of you in Tallahassee to help us.” 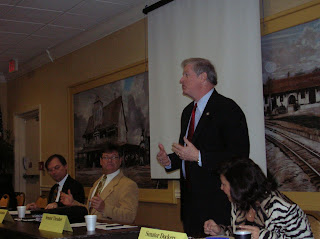 Sen. John Thrasher, R-Jacksonville, said the hearing testimony was “incredibly impressive.” He is not on the committee but attended because his district includes Palatka.

Linda Myers of Palatka said she was excited to be singing to the choir because she expects the senators attending the hearing in Palatka to put a strong state policy in place.

“In North Florida, we want you to say, ‘Yes’ — to understanding that water is not a commodity to us,” she said. “We live it, we play it — it is a source of our life and a source of our enjoyment. We don’t want water to become a plug-in figure in growth management. It’s our quality (of life).”

(Story and photo copyright by Bruce Ritchie and FloridaEnvironments.com. Do not copy or redistribute without permission.)