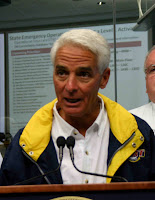 Gov. Charlie Crist said Monday that conference calls among state and county emergency officials dealing with the oil spill now are open to the media.

The Division of Emergency Management holds the conference calls daily. As recently as last Wednesday, the Florida Tribune and other media were denied requests to monitor the calls. Division of Emergency Management spokesman John M. Cherry III said last month the division was not legally required to allow news media to monitor the calls, that barring the media would ensure that rumors and incorrect information is not reported and that having reporters on the line “inhibited open dialogue” on the calls.

But Crist said on May 3 that the state would be “transparent” in its response to the oil spill. And appearing live on CNN on June 4, Crist said transparency, accountability and honesty are “incredibly important,” and he added, “Without accurate information, it’s very difficult to respond accordingly.”

Told Monday that the media had been barred from the conference calls, Crist said, “They are now open. That is a directive from me.” He also said that Florida Department of Environmental Protection Secretary Michael Sole’s conference calls with legislators would be open to the media. “They are transparent,” Crist said. “It’s a new day.”