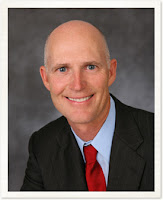 Republican candidate for governor Rick Scott says he would put a bull’s-eye on the Florida Department of Community Affairs, the scorn of many developers.

Scott said he would support eliminating DCA, which oversees growth in the state, according to a St. Petersburg Times report on Friday.

“On the campaign trail, I’ll tell you the one that everybody’s fed up with. It’s DCA,” Scott says. “It’s really impacted people that want to build things … I’ll tell you, it’s really killing jobs.”

But DCA Secretary Tom Pelham said that eliminating the agency would be “disastrous.” Environmentalists have had to frequently defend the agency from criticism.

Supporters of Amendment 4, also known as “Hometown Democracy,” pounced on the story on Friday. The ballot measure, which faces opposition from developers and business groups, would require voters to approve local comprehensive land use changes.

Pelham said that whenever economic times are bad in Florida, “the tendency is to point the finger at whatever planning or regulatory system exists,” even though that same system exists when times are good.

Democrat Alex Sink has said she supports reauthorizing the department. The future of the agency was left in question last spring when the House refused to reauthorize the agency.

Rep. Dean Cannon, R-Winter Park, the incoming House speaker, says in the Times story that he wouldn’t mind seeing DCA disappear, with its functions distributed to other agencies.

Amendment 4 supporters said in a statement Friday that Scott’s comments provide yet another reason to support the measure.

“The only hope that Floridians have for responsible, healthy growth in our state is to adopt Amendment 4 and have the ultimate say on development in their community,” Florida Hometown Democracy president Lesley Blackner said. “If we leave growth management to Rick Scott and Dean Cannon, we truly will see Florida paved from East Coast to West Coast.”