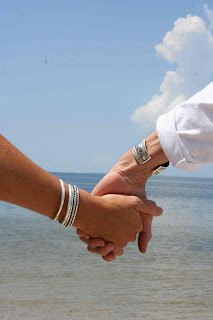 Many people along the Gulf coast are affected by the ongoing BP oil spill, says Linda McCue of Tallahassee.

On Saturday, she joined hands with about 15 of them at a Wakulla County beach in a quiet demonstration in support of the coastal environment against the effects of oil drilling.

“I think it helps some people connect, because crisis tends to bring people together,” McCue said in Shell Point, before joining hands with the others. “Things they have taken for granted for so long, now they are beginning to see how delicate and how much protection those things really need.”

There were no effects of the oil spill to be seen at Shell Point, where people swam, fished and windsurfed along the glassy surface of the water. About 20 miles east in Franklin County, a line of red oil spill boom extended across the opening of Alligator harbor to block oil, should it arrive. A truck carrying yellow oil boom was stopped along the shoulder of U. S. Highway 98. 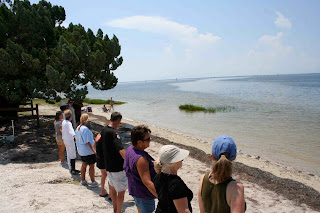 “Hands Across the Sand” was launched in February by Seaside restaurant owner Dave Rauschkolb in response to the Florida House considering legislation to allow oil drilling in state waters within 10.3 miles of the coast. The House never voted on a drilling bill because of the Senate’s reluctance to go along.

At Shell Point, Anissa Thompson, 13, of Crestview, said her local beaches in Walton County were being pelted with tar balls last week. Waves of oil washed ashore last week on the white sand beaches of Pensacola.

“I just think it’s a really sad thing that has happened to our beaches,” she said.

Joan Hendrix said she was there to protest against the greed of the oil industry. She said she is worried about the birds and sea turtles affected by the spill and other life in the deep ocean that no one can see.

“I feel saddened by it and hurt by it,” she said of the spill. “I’m to the point where I don’t understand how people can abuse the earth’s resources for greed and money. We only have one earth.”

(Story and photos copyrighted by Bruce Ritchie and FloridaEnvironments.com. Do not copy or redistribute without permission, which can be obtained by contacting brucebritchie@gmail.com.)