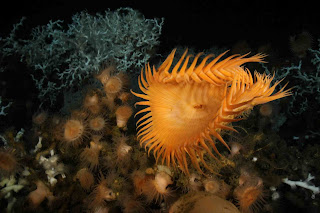 Venus purse anemone on a patch of Lophelia coral at 2500 feet deep in the Gulf of Mexico.

Scientists’ lack of understanding about the complex relationships between marine organisms should be considered in the debate about oil drilling in the Gulf of Mexico, Florida State University researchers said today.

FSU is holding its second symposium on oil drilling with the focus today on the gulf ecology and regulatory impacts of drilling. House and Senate leaders are proceeding separately towards possibly developing oil drilling legislation during the upcoming legislative session, which begins March 2.

During a morning news conference, FSU researchers said the decision on whether to drill would be made by policymakers — without researchers telling them whether it would be harmful to the Gulf environment. But FSU Coastal and Marine Lab Director Felicia Coleman also said there is a lack of information about ecological relationships and the effects of drilling on the Gulf ecology and the services it provides, such as fishing.

“If we don’t really understand (what) the implications or consequences are to disrupting those services, that is something we need to have a better hold of,” she said. “You always take the risk of reaching a tipping point beyond which you can’t come back. And it would be nice to know where that is before you get that far.”

Ian MacDonald, a professor in FSU’s Department of Oceanography, said oil and gas production has a good safety record in the Gulf of Mexico but the industry also has been surprised by the level of damage from hurricanes in recent years.

“I guess my feeling is the deep sea can be a good place a good place to produce oil and gas if the regulation is sufficiently informed by good science and well-regulated and well-enforced by a vigilant federal mission or state mission.” 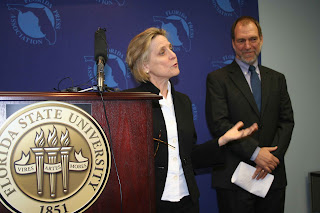 The deep Gulf waters are as biologically-rich as a rainforest and should no longer be considered a “barren desert,” researchers said.

Some “chemosynthetic” ecological communities convert into food some of the oil and gas seeping from the ocean floor, MacDonald said.

But he said it would be over-simplistic to suggest that drilling or oil spills would actually be good for those organisms. Those ecological communities thrive on gas and oil that is slowly released, widely dispersed and is more diluted than would occur in an oil spill, MacDonald said.

“Yes, the ocean can adapt to small quantities of oil and gas if they are widely dispersed and not too concentrated at any time,” he said. “However that doesn’t excuse the oil companies or transport companies from exercising all possible care to prevent any kind of accidents.”

The symposium was coordinated by the FSU Institute for Energy Systems, Economics and Sustainability. For more information on the institute, go to http://www.ieses.fsu.edu/ .

(Top photo by Peter Etnoyer.
Bottom photo and story copyrighted by Bruce Ritchie and FloridaEnvironments.com. Do not copy or redistribute without permission.)

1 thought on “Understanding of Gulf ecology lacking in drilling debate”