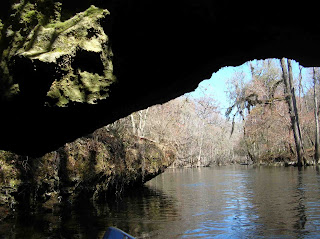 A view of limestone outcroppings along the Ichetucknee River in Columbia County.

The bill was introduced by Sen. Lee Constantine, who chaired the Senate Select Committee on Florida’s Inland Waters as it held hearings around the state last fall and winter and listened to concerns about pollution threats to springs and rivers.

SB 550 provides criteria for a statewide stormwater management rule, directs to the Florida Department of Environmental Protection to set numeric limits for nitrogen and phosphorus in waterways, establishes regional utilities to maintain and operate septic tanks and bans the land application of sewage sludge.

Keith Hetrick, general counsel for the Florida Home Builders Association, told the Senate Government Oversight and Accountability Committee that the state isn’t ready for the septic tank utilities, which he said would add another layer of government that would cost residents between $10 and $50 per month.

He said the Legislature should wait another year or two for a Florida Department of Health study that could provide cheaper “passive” technology that would help improve septic tanks.

Sen. Charlie Dean, R-Inverness, served on inland waters committee and spoke at a springs rally at the Capitol in February but voted Tuesday against the bill, saying it creates a “tax” by requiring septic tank inspections and creates concerns for agriculture.

Constantine said his bill provides a “clear, easy, proactive” approach to helping the state’s 2.6 million septic tank owners so they won’t get stuck paying more than $6,000 to replace failing septic systems. He also said the U. S. Environmental Protection Agency is “standing over” Florida with proposed nitrogen and phosphorus limits that could prevent the future installation of septic tanks.

The bill passed the Government Ovesight and Accountability Committee 5-3. It’s next stop is the Senate General Government Appropriations Committee.

Constantine said he would work with groups that voiced opposition. “I can assure you if we haven’t worked out a lot of these concerns, it won’t see the light of day,” he said.

(Content provided by the Current, produced by The Florida Tribune. Story and photo copyrighted by Bruce Ritchie and FloridaEnvironments.com. Do not copy or redistribute without permission.)