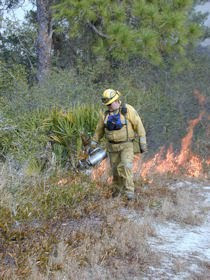 The U.S. Environmental Protection Agency has agreed to set numeric standards for nitrogen, phosphorus and other nutrients in Florida waterways, replacing the state’s descriptive standard that environmental groups said failed to protect springs, lakes and rivers from algae blooms.

But agriculture and industry groups have challenged the proposed consent order between environmental groups and the EPA, and Bronson’s agriculture department has sought to intervene on their behalf. U.S. District Judge Robert Hinkle is scheduled to hold a hearing on the proposal in November.

Bronson said setting a numeric standard could threaten the practice of deliberately burning forest underbrush to improve wildlife habitat and reduce the risk of wildfire. He said the EPA promised a few years ago that forest fires would not be used in determining air quality standards but then the federal agency included the fires anyway.

“I’m afraid the same thing is going to happen” with prescribed burning and water quality, Bronson said. “I want to make sure this Cabinet understands that we have taken this thing so seriously we have entered into the challenge on the settlement.”

Bronson’s statement was dismissed as more “hysteria” by an attorney for the Earthjustice law firm’s Florida office, which represents groups including the Florida Wildlife Federation, the Sierra Club and the St. Johns Riverkeeper in a lawsuit against the EPA.

An EPA spokeswoman in Washington told FloridaEnvironments.com that the federal agency is working with the Florida Department of Environmental Protection to establish scientifically-defensible standards.

“Because EPA has not finalized the numeric criteria values at this time, it is unknown what water quality management decisions the state of Florida will need to make to implement the (water quality standards) in order to achieve environmental protection goals,” spokeswoman Enesta Jones said in an e-mail response.

Bronson criticized the proposed statement today during a presentation of a Cabinet resolution recognizing Oct. 19-24 as Florida Forestry Week. Forestry provides nearly $16 billion to Florida’s economy each year and 130,000 jobs, he said.

The EPA, Bronson said, is moving too fast to set a numeric standard and he said it should be given time to receive third-party review for being scientifically sound. He said he thought the Florida DEP had been doing a good job in working toward a standard before EPA stepped in.

“Hopefully we will come to the right decision based on science,” he said.

Earthjustice attorney David Guest said in response that he has never heard of prescribed burning being affected by water quality regulations. He also said the consent order, if adopted by the court, gives EPA nine months to set a limit after first proposing a rule by Jan. 14 and that’s three times longer than he said is provided for in federal law for review.

“I think if we don’t do something about nutrient pollution and we turn every river into the state in to a stinking, green-slime river, all kinds of businesses will be leaving the state,” Guest said.

(Top photo courtesy of the Florida Division of Forestry. Bottom photo and story copyrighted by Bruce Ritchie and FloridaEnvironments.com. Do not copy or redistribute without permission).