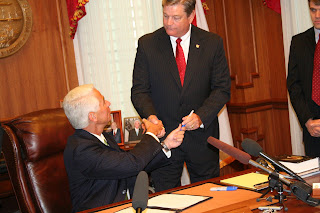 Farmers are struggling within the slumping economy while also battling species such as the tropical soda apple from South America, Bronson said. The plant’s seeds, contained in an orange fruit, are distributed by livestock and wildlife.

“It becomes so invasive you can’t grow a crop, you can’t grow cattle, you can’t do anything if it takes over,” Bronson told reporters during a bill-signing ceremony in the Governor’s Office.

Sponsored by Bembry, a Democrat from Greenville, HB 255 codifies Florida’s participation in the Interstate Pest Control Compact, which consists of 37 states including Florida.