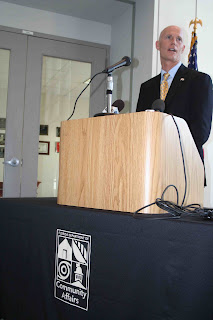 After hearing Gov. Rick Scott speak Tuesday during a visit to the Florida Department of Community affairs, department systems programmer Robab Fayazi said she remains worried about losing her job there.

Scott was peppered with questions by employees at the department, which he is proposing to eliminate.

DCA oversees local growth management decisions and it includes the Division of Emergency Management, the Division of Housing and Community Development and the Florida Communities Trust (FCT) parks buying program. Scott proposes eliminating FCT, cutting 48 growth management oversight positions and moving pieces of the department into other agencies. All but 40 of the department’s 358 jobs would be eliminated.

Scott repeatedly has called DCA a “job-killer.” However, since 2007, DCA has approved 1.5 billion square feet of new commercial and office space and nearly 600,000 housing units.

Asked by a reporter how he can apply the “job-killer” label to DCA, Scott responded, “What we’ve got to do is make sure the process we have here is a process that makes sense, that the people who want to expand in our state know how to do it [and] know what that time frame is.”

“We always have to remember that we care about our environment. We care about building things in our state. We want to do it in a logical manner. But as a general rule, most of the decisions ought to be made locally,” he said.

Scott last week described his 2011-12 budget recommendations as a “jobs budget” that cuts state spending and eliminates 8,958 state jobs. He told the DCA employees during his visit Tuesday that they were hard workers and that “no one knows all the good things you guys do.”

“On the campaign trail, all they wanted to complain about was how fast you all do permitting — or growth management,” he said. 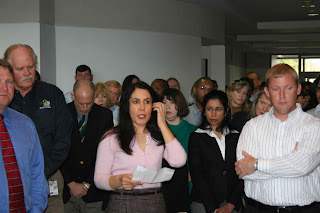 DCA employees asked the governor about budget performance measures and pension rules for laid-off employees. Fayazi reminded the governor that thousands of state workers were at risk of losing the jobs. “Do you consider that a problem?” she asked.

Scott replied that his focus was on building private sector jobs. “We’re going to work hard to make sure that people have an opportunity to look at other agencies and to look at other jobs,” he said.

After the governor left, Fayazi said she said she can’t afford to wait for years while private sector jobs are being created.

“I don’t feel any better about the situation than I did before,” she said. “There was no real reassurance there will be immediate relief for people who are going to lose their jobs.”

(Photos and story copyrighted by Bruce Ritchie and FloridaEnvironments.com. Do not copy or redistribute without permission.)