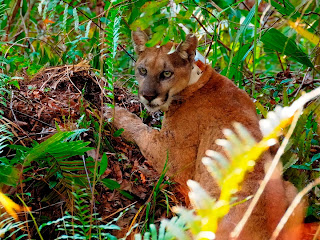 Two national environmental groups on Thursday filed a lawsuit claiming that the U.S. Environmental Protection Agency had failed to consult with wildlife agencies on regulating pesticides that are harmful to endangered species, including the Florida panther.

The lawsuit, filed in San Francisco by the Center for Biological Diversity and the Pesticide Action Network, cites the regulation of pesticides that have been important to Florida farmers. A Florida Farm Bureau Federation representative said the lawsuit raises concerns for farmers.

The pesticides, according to the lawsuit, pose a threat to more than 200 species of endangered and threatened wildlife. They include the panther, the Key Largo woodrat, the Florida scrub jay, the piping plover, the Gulf sturgeon, the frosted flatwoods salamander, the eastern indigo snake and three mussels species found in the Apalachicola and Ochlockonee rivers.

The pesticides include the fumigant methyl bromide, which is used on strawberries, and atrazine, a weed-killer that is important to corn growers in the Midwest and sugar growers near the Everglades.

“For decades, the EPA has turned a blind eye to the disastrous effects pesticides can have on some of America’s rarest species,” said Jeff Miller, a conservation advocate with the Center for Biological Diversity. “This lawsuit is intended to force the EPA to follow the law and ensure that harmful chemicals are not sprayed in endangered species habitats.”

An EPA spokesman said the agency doesn’t comment on litigation.

Methyl bromide use is declining because of increased restrictions, according to the agency. And in 2009, the EPA launched a review of atrazine’s use. A scientific peer review of the atrazine study findings is pending.

Kevin Morgan, executive director of the Florida Farm Bureau Federation, said he could not comment in-depth on the lawsuit. But he did say wildlife receive thorough consideration in the regulation of pesticides and they are safe if used according to label directions.

“Any lawsuit that threatens the safe use of pesticides is always a concern to farmers,” Morgan said. “That is a tool in our arsenal to feed the world.”

(Photo courtesy of the Florida Fish and Wildlife Conservation Commission. Story provided by the Florida Tribune. Story copyrighted by Bruce Ritchie and FloridaEnvironments.com. Do not copy or redistribute without permission, which can be obtained by contacting brucebritchie@gmail.com.)