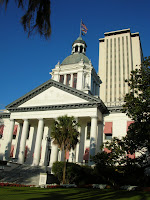 A bill that would require renewable energy use by utilities advanced in the Florida Senate today while the House amended a bill to encourage oil drilling off the state’s coastline.

SB 1154 would require 20 percent of energy by 2020 to come from “clean energy” sources including nuclear and solar. The bill, introduced by Sen. Jim King, R-Jacksonville, was approved by the Policy and Steering Committee on Ways and Means but its House companion hasn’t been heard in committee — placing its future in doubt.

In the House, a committee substitute introduced by Rep. Dean Cannon, R-Winter Park, for HB 1219 would create a process for the governor and Cabinet to approve future oil and gas drilling leases. Environmental groups that oppose drilling said they were caught off-guard by the proposal.

The bill, as approved today by the House Policy Council, also would provide royalties from drilling to pay for the state’s Florida Forever conservation land-buying program, which the House has not funded in its proposed 2009-10 state budget. The measure, environmental groups said, may be an attempt to force them to choose between drilling and land conservation.

The oil industry “is spending big bucks to get this passed,” said Susan Glickman, representing the Southern Alliance for Clean Energy.

“It’s a complete shift in policy in Florida related to offshore drilling and exploration,” she said. “We knew about it at 11 o’clock last night. They obviously had this prepared in advance.”

But David Mica, executive director of the Florida Petroleum Council, said several oil drilling bills including HB 1219 had been debated in committee and were moving through the process. He credited Cannon, the designated House Speaker in 2010, for his leadership on the issue.

Gov. Charlie Crist reopened the drilling debate last summer while supporting Republican presidential candidate John McCain, who supported drilling in the eastern Gulf of Mexico. While Florida officials had been lockstep in opposition to drilling, Crist said it should be allowed if it was far enough from the shoreline and safe enough to protect Florida’s coast.

Mica said the amended bill may be more restrictive than the original version, which required DEP to recommend a plan to allow for drilling in the Gulf of Mexico while also protecting the environment.

“It’s that necessary part of the future energy equation that I think involves renewables, alternatives, conservation, efficiency — and oil and gas,” Mica said. Cannon was not immediately available for comment.

A DEP spokesman said the department is reviewing the bill to determine what impact it might have.

In the Senate, Crist’s revised proposal to create a renewable energy requirement for utilities continued to advance even as its future in the House remained uncertain.

Crist in 2007 asked the Public Service Commission to adopt a requirement for 20 percent renewable energy — not including nuclear — by 2020 to reduce greenhouse gas emissions. An energy bill adopted last year required the Legislature to approve the requirement

HB 1319, the companion to SB 1154, hasn’t been heard in committee. Crist said he has urged the House to take action but Speaker Larry Cretul said his chamber would wait for the Senate to act.

That prompted Sen. JD Alexander, R-Winter Haven and committee chairman, to remark during a busy committee hearing, “I’ve got lots to do on this agenda and this bill’s got nowhere to go.”

Environmental groups support the bill but oppose including nuclear into a new “clean energy” definition that required only 15 percent from renewable sources, such as solar, biomass and wind energy.

Copyrighted by Bruce Ritchie and FloridaEnvironments.com. Do not redistribute without permission.