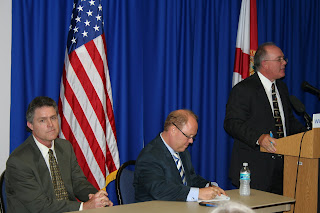 House Republicans last April overwhelmingly supported HB 1219, which would have allowed drilling within three miles of the Gulf Coast. Democrats led the opposition in the 70-43 vote.

But the bill was never heard in the Senate because of concerns that the drilling measure arose too late in the session. Last month, Gov. Charlie Crist said he would like the Legislature to take up drilling in a special session if one is held to address a Seminole Tribe gaming agreement.

Today, the Florida House Democratic Caucus invited Audubon of Florida’s Eric Draper to square off against attorney Frank Matthews, who represents Florida Energy Associates. While they disagreed on much, Matthews seemed to concede to Draper on a few issues.

Draper said drilling supporters are using “very speculative numbers” about the revenue the state could earn from oil and gas production and that drilling is “dirty, dangerous and ugly.”

“Is the real story that this is just a Ponzi scheme, another speculation that we as taxpayers in the long run are going to have to buy our way out of” like the Coastal Petroleum lease? Draper said.

The Cabinet agreed in 2005 to spend $12.5 million to purchase a lease from Coastal Petroleum for Gulf of Mexico drilling rights issued in the 1950s and to settle company’s lawsuit against the Florida when the state refused to grant drilling permits.

Matthews, an attorney with Hopping Green & Sams in Tallahassee, fired back that Draper “Eric’s sensationalism is what we’ve heard on the stump and that’s what you heard today.” Matthews said the state today would place more restrictions on a lease than it did for Coastal Petroleum.

“That is all the request would be from our folks: Repeal the ban so you can consider what are the standards, what are the terms and conditions you would consider in the leasing of state waters?”

Otherwise, Matthews seemed to concede to some arguments made by Draper: 1) That oil exploration wouldn’t provide any state revenue for years — at least two, according to Matthews; 2) that drilling won’t make Florida energy independent because petroleum is an international commodity; and 3) it’s unclear how much oil may be present in Florida’s Gulf Coast waters up to 10 miles out.

Petroleum Consultant Donald A. Goddard of Baton Rouge, La., cited federal reports that he quoted as saying there may be 4 billion barrels of oil in the eastern Gulf of Mexico. But he said test wells need to be drilled to determine what lies below the surface.

Rep. Mary Brandenburg, D-West Palm Beach, said she wants some engineers to come before the Democratic Caucus with information about drilling safety. But she rejected Draper’s suggestion to bring in Florida Department of Environmental Protection officials to talk.

“I want to hear from somebody who doesn’t have a Republican for a boss,” she said.

Some Democratic representatives seemed open to the idea lifting the state ban on drilling and allowing or encouraging oil and gas exploration, then deciding later whether to allow production.

But House Minority Leader Franklin Sands of Weston seemed to reject the idea.

“That’s kind of synonymous with someone saying just leave the door open so I can come in and have a look around,” he said.

A spokesman for the House Republican majority office said Rep. Dean Cannon, R-Winter Park, will participate in an Oct. 28 forum at Florida State University on the issue.

“I can tell you no one wants to endanger Florida’s natural resources — we’re talking about the beaches,” said Joseph Agostini, communications director in the House majority office.

(Story and photo copyrighted by Bruce Ritchie and Floridaenvironments.com. Do not copy or redistribute without permission.)