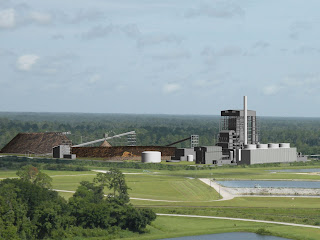 Officials in the biomass energy industry say regulatory uncertainties continue to affect the development of new projects in Florida.

As state officials continue to promote biomass as a source of energy that will create jobs in Florida, some projects remain in limbo while company officials say others remain viable. A company proposing to build a biomass gas electric plant in Hamilton County says it likely will allow its permit to lapse later this year because of poor market conditions.

“Florida has a unique opportunity to become a leader in the development and production of alternative energy, especially biomass,” Putnam said in a statement. “By investing in higher education, research and grants, the [agriculture] department can enable Florida farmers, scientists and academics to explore the state’s options for energy production.”

The Florida Department of Environmental Protection has approved permits for eight biomass energy projects in the last two years.

Adage said this week it expects to allow its DEP construction permit to lapse later this year for its 55-megawatt plant in Hamilton County. The company, which also ended development of a project in Washington state, blamed poor market conditions for renewable energy in Florida for halting the Hamilton County plant. A company spokesman could not be reached for comment.

Elsewhere, Apalachicola Riverkeeper environmental group wrote a letter on March 11 raising concerns about air pollution and water use by the new proposed biomass electric plant in Gulf County. An application for Northwest Florida Renewable Energy LLC was submitted in August 2009 and withdrawn in April 2010 before being submitted by a new parent company two months ago.

Other projects remain in the works.

And American Renewables has settled three legal challenges to its proposed 100-megawatt woody biomass power plant in Gainesville. The company still is working on financing for the project but hopes to complete construction in 2013.

Low natural gas prices and lack of action by Congress and the state to encourage renewable energy use are creating mixed messages, said Josh Levine, director of project development for American Renewables.

“You are going to end up seeing overdevelopment of natural gas resources and a utility infrastructure that is highly suspect to supply variations and price volatility,” Levine said.

(Story copyrighted by Bruce Ritchie and FloridaEnvironments.com. Do not copy or redistribute without permission which can be obtained at bruceBritchie@gmail.com .)