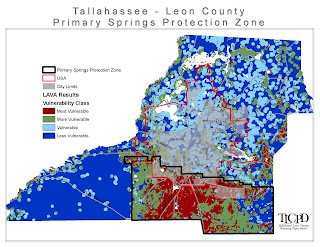 Wakulla Springs has become choked with weeds and algae in the past decade as nitrogen levels in groundwater increased. Scientists say nitrogen sources include Tallahassee’s sewage treatment plants, septic tanks, fertilizer use and dirty stormwater runoff.

The city of Tallahassee and Leon County are considering ordinances establishing a springs protection zone where advanced septic systems will be required if sewage treatment is not available. The City Commission will hold an initial public hearing and vote on its proposal Wednesday night.

Also Wednesday, the city, Wakulla and Leon counties and the Florida Department of Environmental Protection kick off a two-day workshop on reducing pollution and restoring the health of Wakulla Springs.

“Nobody has made any choices or any selections,” Pennington said. “What could come out of the workshop is an agreement by local governments to look at these management utilities as an option.”

SB 274 by Sen. Lee Constantine, R-Altamonte Springs, would require the state to establish protection zones around Wakulla Springs along with Ichetucknee Springs in Columbia County and Silver and Rainbow springs in Marion County. Gov. Charlie Crist has expressed support for the bill and for springs protection. (See Dec. 22 story)

Tallahassee in 2006 agreed to spend $160 million to upgrade its two sewage treatment plants to reduce nitrogen in wastewater sprayed on crops at the city’s Southeast Farm in southern Leon County.

The zone primarily covers southeastern Leon County, where a study determined that the aquifer is most vulnerable to contamination. Other vulnerable areas could be included in the future as “secondary” springs protection zones, according to the Planning Department.

City Commissioner Debbie Lightsey said she hopes the county will go back later and look at other areas where septic tanks are failing. But for now, she said, the focus is on protecting Wakulla Springs and establishing regional cooperation.

“I think if we form one of those and put together a plan that benefits us all we may be able to get some funding for it,” she said.

In a few areas of the country, wastewater utilities have been established to inspect and maintain advanced septic systems or to even own them while charging customers a monthly fee for their upkeep.

“We certainly don’t want a bunch of improperly functioning performance-based septic systems in place harming our environment,” Kessler said. “Some form of oversight is needed, and that’s also being looked at.”

The workshop, which costs $30 and includes a lunch, will be held Wednesday and Thursday at the Tallahassee Automobile Museum, 6800 Mahan Drive at Interstate 10 and U.S. Highway 90. For more information, go on the Web to www.1000fof.org or call 1000 Friends of Florida at 222-6277.