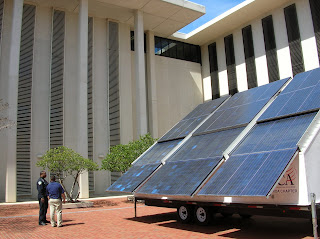 A coalition of environmental groups and businesses today urged legislative leaders to take action on a proposed renewable energy requirement for utilities.

The Public Service Commission is recommending that investor-owned utilities produce 20 percent of their energy from renewable sources by 2020, a move that alliance members said would create jobs. A comprehensive energy bill adopted in 2008 requires the Legislature to approve the PSC recommendation.

Members of the Renewable Energy Alliance, which includes the Florida Retail Federation, said they were concerned that the proposed “renewable portfolio standard” would not clear the Legislature before the session ends in May.

“There is plenty of time to do it but there definitely is concern,” said Susan Glickman, an advisor to the Natural Resources Defense Council and the Southern Alliance for Clean Energy. “We need economic stimulus now. We need it as soon as we can get it.”

The alliance said it was delivering a letter to House and Senate leaders urging action on the “renewable portfolio standard,” which is contained in HB 1319 and SB 2490. The Senate Committee on Communications, Energy and Public Utilities is expected to propose a bill containing the RPS next week, Glickman said.

House Speaker Larry Cretul said through a spokeswoman that the issue is “very important and very complex.” The House, he said, “intends to look at it methodically and deliberately to be sure that energy consumers’ interests are fairly presented and considered.”

Other House and Senate leaders were not immediately available for comment.